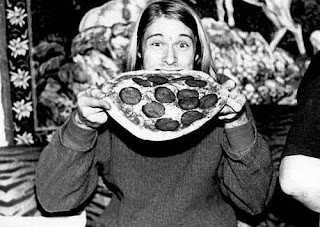 Event details:
8-10pm, this Saturday, July 23rd, at the City Reliquary Museum (370 Metropolitan Ave, BK, NY)
Featuring:
Reading by Me!
Beers from Brooklyn Brewery!
Pizza from I don't know where, but hopefully it's Grandma Rose's and Best Pizza again because both of those places are awesome!
I am hoping my grandfather will be there, so bring your grandfather!
In fact, I will give a free set of every issue of Slice Harvester Quarterly that's out so far to anyone who shows up with a Grandparent. It doesn't matter if it's your grandparent. If you know someone who has grandchildren or is just generally grandparent age, bring them and I will give you free stuff!

Do me a favor and RSVP on Facebook. Do it even if you aren't coming because it makes me feel good to check that thing and see a ton of people on there. 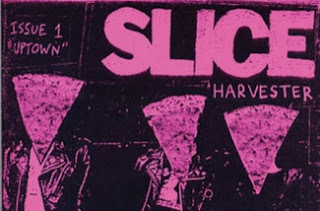 2. It seems I have been profiled in New York Press! Read the article! It is really nice. Check out other stuff the author Jon Reiss wrote because he seems to be a pretty good writer and he is also a total sweetheart and when I met him he looked like a young George Tabb, who also wrote for the New York Press, but he hasn't looked like that again any time I've seen him since, so he's also a shapeshifter or something!

3. And finally! My good friend and Slice Harvester's #1 most frequent Pizza Adventurer, Caroline Paquita, is starting an Independent Publishing Venture called Pegacorn Press! This is very exciting news, because Caroline is not just a talented artist, she is also an incredibly diligent worker, unflinching in the face of adversity, and if she sets her mind to something, she will make it happen.

She is currently involved in some internet fundraising, so if you've got five bucks to spare, go over to IndieGoGo and email homegirl some money! Everyone who donates gets a present in the mail! If you can't spare five bucks, you can at least "like" her project on Facebook and then tell everyone you know to donate and you can just pretend you are one of the anonymous donors, and no one will know and the only real tangible repercussion will be a lingering feeling of disappointment in yourself that you will carry with you your whole life for not forking over FIVE FUCKING DOLLARS for something awesome.
Posted by Slice Harvester at 12:55 PM

Labels: Pizza Party, Up The Punx