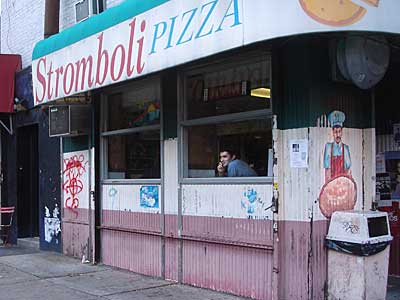 East Village Pizza: "Maybe if you are a whiny yuppie with stupid facial hair this is the pizza place for you." East Village Pizza had these three really pushy yuppies sitting inside when we went in. Two sort of conventionally attractive women and a dude wearing a nazi overcoat with Mitch Miller facial hair, who possessed a sense of entitlement to behave aggressively to the staff in the way that only people who have never worked a service job in their lives are capable of. It was a total bummer and I really wanted to side with the pizza guy and write them a great review because of the shit they must have to deal with from all the Rudes and Cheaps in this neighborhood, but then they gave us our pizza and it was just kind of shitty so I guess I don't get to do that. This pizza was kind of a bummer. It was way overcooked, so the cheese was burnt and the bottom was brittle-crunchy, but there was still a whole layer of totally uncooked dough that left the whole thing feeling like a mealy apple in my mouth. Kevin said it reminded him of Papa John's, which reminded me of the only time I even ate Papa John's. I had just helped Kevin move into a house he used to live in, and to celebrate me and him and our friend Dustin drank an entire bottle of Jameson we found while we were moving. By 6pm or so, we were all pretty much blacked out, kicking a soccerball around on the street in Bed Stuy when Kevin remembered that the moving truck he rented came with a Papa John's giftcard. We ordered the pizza entirely over the internet and never spoke to a real human through the entire process. I remember doing a lot of really drunk pontificating about man's estrangement from man and how that is embodied by our ability to drunkenly order a pizza on the computer. I don't really remember much after that but I do remember coming to next to Dustin and Kevin, all of us fully dressed, covered in "butter sauce" and feeling an acute sense of shame. I have discussed this 2 Bros. at length with my friend, sometimes adversary, and long-overdue future pizza companion Andy Folk, in our ongoing debate about pizza and specifically regarding the 2 Bros. v. 99¢ Fresh feud. He always mentions this 2 Bros and I always say, "I dunno, Andy, I've never eaten at that one, but every other one sucks." I think I have to concede defeat, because this is the best dollar slice I've ever had, though it's far from Objectively Good Pizza. Kevin Mahon of Famous Local Rock Band THE FORGOTTEN, who is my roommate and has already been a Pizza Companion, and Steve Powerballs of Infamous Local Rock Bands TURBOSLUDGE and SOMEONE AND THE EVERYONES, had joined me on this fine afternoon of moderate pizza consumption. "This feels like a fucking dish sponge," said Kevin as he lifted the slice to his drooling maw. "Yeah, but it smells pretty good," said Steve, who is vegan and thus was only smelling and not tasting. As it happens, Steve's nose is a more trustworthy judge of a slice's character than Kevin's hands, because this slice was actually alright. My notes say, verbatim, "This is pretty good! I am surprised!"

But it was a little too thick, though ultimately it was just middling and never quite crappy. This is totally okay for a dollar. I feel like I got my one dollar's worth. Because seriously, this wasn't so bad. So I have to give it to Andy. Although rereading our correspondence back then, I feel compelled to reprint something he wrote as proof to my family and loved ones that I am not the only person in the world who Can't Enjoy Anything:


i remember once i approached such a transcendental experience you describe... the pizza at 2 Bros that day was so good i was thinking this must be the best in new york, and two slices only cost me $2, i was feeling pretty good.

then i noticed st marks with its noodle shops, headshops, punk stores, and collusion of high and low culture looked a lot like the urban environment from blade runner! suddenly the pizza changed into the food-substance from a sci-fi dystopia, something with a dual nature with one aspect satisfaction of the bodily necessities of the masses and the other a sinister pacification of their desires to break free.

Luckily St. Marks Place provides the answers to the questions it poses, because as soon as I start trembling in fear of the oppressive dystopian future, I just strap on my bong gasmask and take a few tokes of The Mean Green and suddenly I am surfing on a pizza box windsurfer with a slice sail in a sea of marinara. What bodacious times. Watch out for the garlic knot reef and there are hungry pepperoni rolls out today and they can smell your blood so be careful, brodog!