Francesco's Pizzeria & Pasta: "If you're stuck in the middle say..."

This week I had the pleasure of eating pizza with my friend Nate Doyle. Nate is from Maine and is really punk. He does a comic called Crooked Teeth, which I absolutely love (get it at Desert Island) and plays in a rock group called Nomos, whom I have never heard (sue me). Nate rules and when we were leaving he told me he was going to make a comic about today, which is awesome, because I love being featured in people's comics. Also, Nate is friends with this person Izzy who I just ordered a bunch of patches from. They look like this: 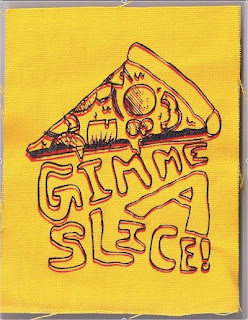 Except they are on white canvas and printed in only black, not black and red, because I am uncreative and when she asked me what colors I wanted I said, "I dunno, just black on white I guess." Soon when I scan one of the actual patches I got, this text and that picture will disappear eternally, so savor it while you can. REGARDLESS of all this nonsense, they are beautiful patches, and they will be offered exclusively to donaters. So donate. There's a button on the right side of the page. It's easy. The name of Francescos' Pizzeria & Pasta kind of annoys me. Like, I don't know, I think "pizzeria" implies that there's likely pasta in the joint. "Francesco's Pizza & Pasta" would be fine, because those are both foods and one doesn't imply the other. I think I am perhaps a little too sensitive, though. Problems with the name aside, this place is totally alright. It is really pleasant to be in there, the lady behind the counter was a total peach, and I felt like me and Nate could've sat in the place catching up for a while and no one would've shot us the evil eye. Not because it wasn't busy, mind you, but because they are just decent enough folks not to go around shooting evil eyes. They are not uptight. They are relaxed. They take sea salt baths and go to the sauna. They let insults wick up and roll off their shoulders like rain on a delivery guy's poncho and they accept compliments as gracefully as a skilled pizza maestro throws dough. These are good people. Good people serving okay pizza.