Shalom Chai Pizza is a truly wonderful place, but before we get there, let's zoom in on my friends for a minute because this picture is too awesome. 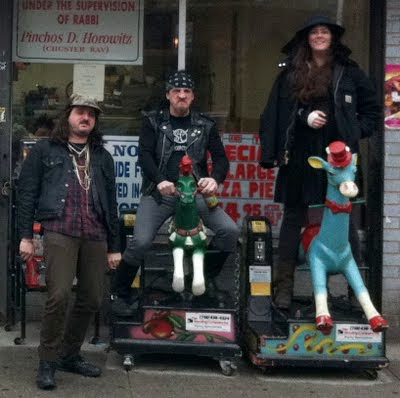 I wish they were in a band together so that this could be the awesome band photo. Best proposed band name wins a copy of the new issue of Slice Harvester Quarterly.

Anyway, Shalom Chai is as awesome on the inside as it is on the outside. This place was boisterous! Like just real loud. There was a pretty diverse crowd in there for a kosher place, including one dude who screamed out everyone's name but ours as they came in. Hopefully at some point this dude is gonna know my name. There was also a table of old dudes with no food who just sat there shit talking for fucking ever! It was so awesome. And the pizza, the pizza was easily the best kosher slice I've ever had. This slice had great ratios, although according to Meredith, it was "floppier than I would've expected for how crispy it looks," which was true, but all in all, it had a really good texture for a kosher pizza. The cheese didn't taste nasty like many kosher slices of the past, and the crust was pretty good! T-Bone really liked this slice and continued to talk about it all day.

While I was ordering the slice, I noticed something interesting on the chalkboard by the register. 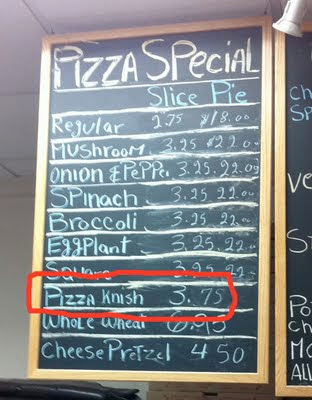 That's right! Pizza Knish! I was intrigued, so I got one, and we ate it! I will eat any food that is advertised as Pizza _______. Give me Pizza Vindaloo, Pizza Sushi, Pizza Pudding. I will try eating it once. And so it was with this Pizza Knish. This thing was weirdly awesome although not so great. It wasn't hot enough, so the cheese didn't melt all the way, and sauce was the same, kinda nasty paste from the slice. And there wasn't really enough of either. I would probably eat this again, though. Logan said this was "definitely date food," and I can totally see his point. This whole place is awesome. It is so cool to hang out in, they have all those cool animals outside, you can walk over a bridge either before or after. It's a perfect date spot! But the pizza stinks. So does the knish, but at least it's got enough novelty value to be fun to eat.