Arturo's: "I am not feeling clever enough to make a headline today." Arturo's Pizza is totally awesome. The place looks like a pizzeria should and they serve up a high quality slice. We got a pie fresh out of the oven, which is honestly not my favorite because it's never well done enough for me, and you can't really pop it back in when it's that hot or the cheese turns HORRIBLE. Regardless of the fact that this slice was not as crisp as I may have wanted it to be, it was expertly prepared and totally delicious, especially in comparison to Paparri. Remember what I was saying in the Mimi's review about good pizza generally not looking uniform? Here we have another sterling example. Check that fucker out. That slice has character. Like Richard Edson's face. This pizza was hearty and savory. Noah said, "it tastes like meat!" Not literally, like how the slice at Mimi's tasted like pepperoni. But like, it tastes thick and meaty like how Scotch tastes like Salami. Ultimately, this shit was awesome, is what I'm trying to say.

Slice Harvester has a facebook page. I'm not sure what the point of it is, but I made it today when I came home from work for some goddamn reason. Go become a fan, or something. Mostly this is just about my ego.

Also, my father sent me a link to like, 30 million different ways to say "pizza" in ASL. It is accompanied by all these super rad pictures. Once again, probably no one cares but me. 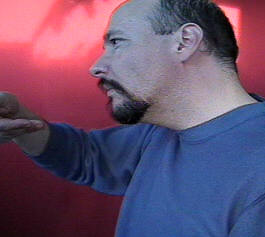 Posted by Slice Harvester at 8:09 PM