Pizzcafe: "This is some of the worst pizza I've ever had in my entire life." Pizzcafe. Woof. This is like, really a horrible place. Like totally shitty and not worth it. Erick said, and had a point, "there's something you gotta love about a place this shitty." But then they handed me my slice and I said, "not this place, Erick." When we got this slice it was fucking Cold. Not warm, not lukewarm, fucking cold. It was horrible. To a certain degree, I have an immense amount of respect for how much the people that work here obviously don't give a fuck about their jobs. It's admirable, for sure.

This one time when I was like, 20, I was walking down 4th Ave from Union Square enjoying an uncharacteristically warm autumnal evening when I noticed an ice cream truck parked facing southwest, on the northeast corner of 4th and 10th. For those who don't live in NY, that means the truck was facing against traffic in two directions and totally protruding into the street. I was curious, and it was warm, so I decided to get a cone. I walked up to the truck and there was nobody at the window, so I knocked. Like a scene from Half Baked, this 16 year old kid poked his head up with a blunt roach dangling out of his mouth and his eyes half closed and gave me the "1 Minute" hand sign before ducking back down. Buddy popped up an instant later and was all, "waddaya neeed?"
And I was like, "lemme get a chocolate cone with chocolate sprinkles."
So this kid goes over to the soft serve machine, picks up a cup, pours some ice cream into it, adds a little milk and mixes it up on the shake stirrer. So I'm like, "whatever, this kid is awesome, he can give me a milkshake if he wants." But then buddy totally puts a straw in the shake and starts Drinking It! And he comes up to me all, "Oh, uuuhhh... what'd you want again?"

But yeah, point is, I am a lover of anyone with a shitty job and a bad work ethic, because honestly, fuck the boss AND fuck the customers. But despite my solidarity with slackers worldwide, my dedication to Bringing You The Real Scoop on Pizza in NYC precludes any allegiances I might have otherwise and forces me to sell out some of my oafish brethren. When I folded this slice over, the cheese totally separated from the dough, leaving that weird, sanguine layer of sauce. Erick looked at me and was like, "this slice reminds me of that Slayer song 'Dead Skin Mask'" 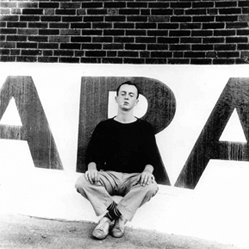