What you are about to read is the first ever Slice Harvester review by anyone other than myself! This is a momentous day. It's a little over a year since I started this project and I already have my first national correspondent. He is a dear friend of mine, an excellent writer, and a pizzaman at the only good slice joint in the entire Northwest, so his credentials are spotless. And besides, he's qualified because I say he's qualified, I'm piloting this ship, goddammit and I'll make the decisions around here.
-The Slice Harvester
TUTTA BELLA 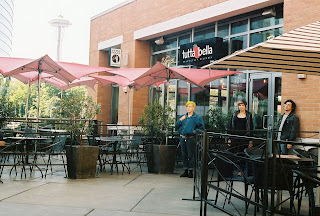 Pizza Today named Tutta Bella as 2010’s Independent Pizzeria of the Year. There are four locations in the Seattle area, and collectively they will top $10 million in sales this year. Tutta Bella is approved by the VPN (“Verace Pizza Napoletana, a group that certifies Neapolitan pizzerias throughout the world and verifies the authenticity of their products” says Pizza Today.) Tutta Bella also serves high end coffee drinks, specially imported wine and beer, and fancy desserts. 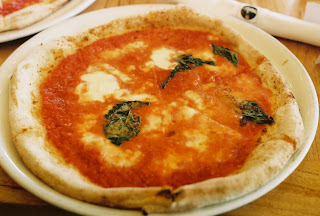 Anyway, their pizza totally sucks. Tutta Bella doesn’t serve slices. The equivalent of a cheese slice is a personal pizza “Margherita,” which is a small pie that’s mostly sauce with three or four mozzarella globs and a couple basil leaves floating around in it. The sauce tasted like Cambell’s soup, but sweeter. It would maybe be good if you dipped your grilled cheese sandwich in it. The cheese slumped around, actually really didn’t taste much like anything and when slurped up, slides down your throat like a raw oyster. The crust was the best part and it was still bland as hell. Buying this pizza for dinner is $11! What a rip off!

Tutta Bella is like eating pizza at Starbucks. (Which make sense because owner, Joe Fugere, was an executive at Starbucks before he quit to open Tutta Bella in 2004) It’s made to look like high end bohemia, but comes off culturally void and boring. The location we ate at sits atop a Whole Foods (they totally have better pizza) in the “up and coming” neighborhood of South Lake Union. The building is ugly and new, and had these big white statues in front of it that everybody I was with hugged affectionately. We could see the space needle from our table, which is kind of neat, because I love the space needle, and our server was great. But don’t go. Nobody should eat here.