I ran into a friend of mine on the train yesterday, and we inevitably talked about Slice Harvester, as I was on my way to eat pizza with my close friend Wesley Davis. Amongst his total and abject honesty (buddy: how many slices have you eaten anyway? me: probably around 200. buddy: I'm disguh... you disgust me.) he leveled a harsh criticism. Quoth (paraphrasingly), "Is the Blake you're talking about this week Blake Schwarzenbach? People will probably care about that and it may behoove you to harp on it a little more." As an answer to his ridiculous question, I guess I should specify that, no, when I refer to "Blake" in these entries I'm not referring to Blake Schwarzenbach. I'm referring to William Blake, who's corpse I dug up and reanimated. The entire afternoon walking around, Blake was pontificating and prophesying totally wild impending doom. I figured it was just remnants from all the time he spent hanging around Milton coupled with the culture shock of being reanimated into New York City, 2010. But it turns out he was just talking about Pastafina. The slice here tasted like jarred salsa. Seriously. I kept thinking of those Pace Chunky Salsa commercials from my youth and a chorus of cowboys in my head shouted "NEW YORK CITY?!?!" every time I took a bite. At some point during the eating of this slice Blake's jaw finally rotted off and he was unable to provide me with a verbal critique, but he did draw me a picture of how eating this slice made him feel: 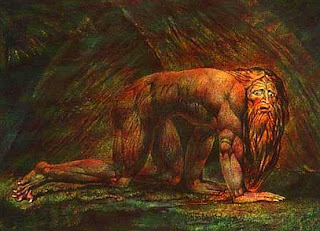 It also bears noting that when I left this place, after Blake and I went our separate ways, I totally barfed all over the sidewalk.

Tonight I will be doing a very short reading at a Rock Concert at Shea Stadium featuring many old friends of mine's wonderful bands and projects. The show starts at 8pm, and it probably costs like, $5-7, I would imagine? All the bands are great, so you should totally come check it out. Shea Stadium is located at 20 Meadows Street, Brooklyn NY 11206. L train to Grand, I think, though I'll ride my bike there because I'm not a poser.
Posted by Slice Harvester at 2:35 PM