I was really excited to eat at Patzeria. Not only was it the first place that looked like an actual pizzeria all day, but when I wrote about Michelle's two weeks ago, someone commented that "there's a decent slice at Patzeria Perfect Pizza on 46th between 7th and 8th." And man, did it feel good to step inside an actual pizzeria. It seemed like, totally the most promising! A secret gem, a hidden oasis in Midtown! And there was practically a line out the door. Corey and I were both pretty damn excited. So imagine how let down we were when this slice wasn't very good! Look at that shit, the cheese peeling off in a solid lump. There very tip of the slice looks like a spy v. spy head. 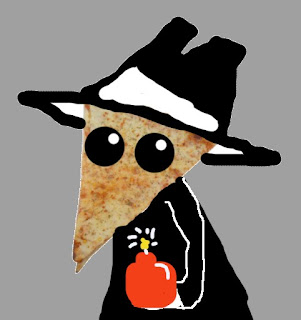 Artists rendering. My apologies to Antonio Prohias.
This is better than those other slices because it's actually pizza, but it is totally garbage pizza. The dough with REALLY good, but the cheese was absolute crap. Awful texture, terrible flavor. Just fucking horrible. Corey said, "I would be unhappy with this if I came here for a meal." And he would be doubly unhappy because the soda was way overpriced to boot.