Sooooo, after massive computer dilemmas, Slice Harvester has been narrowly saved by my girlfriend who perma-lent me her old computer, which runs ten times better than my computer that is like a million computer-years newer. And the keyboard has all the keys and there is music recording software so I can finally finish recording the a cappella techno song "I Want You To Want To Hang Out With Me (Boom Boom)" that I wrote when I was working security at Bonaroo a few years ago whenever I wasn't listening to Born Against and pretending to shoot all the weird college jock-hippies with an imaginary sniper rifle.
I've been freaking out about my lack of internet presence and how un-updated Slice Harvester has been and I just realized that it's only been like, 4 days, which is so not a big deal. In the meantime, I was on a radio show called The Let Out on East Village Radio. In fact, if you want to listen to my awkward interview, follow that first link and click "listen" for the 6/18 show. It was pretty fun, I basically just talked about a bunch of bullshit for a while, had a great time, and then played some records, a few of which mentioned pizza, but most of which were just rad bands with women I know in them, which was my inadvertent theme of the evening. It was especially gratifying to play Twat Sauce on the radio. You can look at the whole playlist here. All in all I had a good time on the radio and I just wish that I had brought an airhorn.
The other thing that happened was that a guy sent me some art! 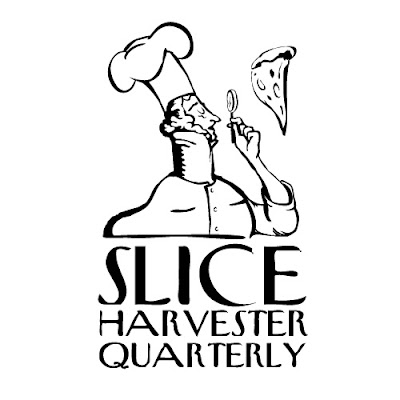 This was, of course, a cleaned up version of the logo I posted a week or two ago. Evan's website, The Southern Drawl is pretty cool. And while I'm probably gonna stick with my hand drawn logo because, as is apparent time after time on this website, I like shit that sucks, I am totally honored that someone as talented as Evan spent his time creating something for Slice Harvester.
We will return to regular pizza reviewing in the morning. In closing, I would like to leave you with this selection of short films:

And finally, a picture my friend Dan Stein just sent me: 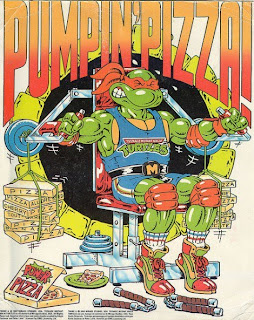 If anyone could get me a tanktop with that screened on it I'll do something totally awesome for you. And one of those shirts with Bugs Bunny and Taz dressed like Kriss Kross would be cool, too.
Posted by Slice Harvester at 6:48 PM