Abitino's: "What made my dreams so hollow was standing at the depot with a steeple full of swallows that could never ring the bell." Abitino's again. I've been to two Abitino's (I, II). Rereading those reviews, I'm reminded that I felt mediocre about the first one and pretty much slightly less mediocre about the second one. I'm pretty sure I basically felt like they were exactly the same. Anyway, this one is the same as those ones. In fact, my notes just say, "other abitino's. blah blah blah. talk about Pawtucket." So, read the other reviews if you want to know how the pizza here tasted, it's exactly the same. And I guess I'll talk about Pawtucket. I don't know why I wanted to do that, but I think it had something to do with this photograph of old fashioned dudes standing around a sausage machine. So, yeah. Pawtucket. It's in Rhode Island. It's near Providence. You can get there on a bus from downtown. There is a little diner there and there is also the train yard where you can get the P & W line, which only runs between Providence and Worcester. For some reason a few summers ago, Paulie was convinced that this was a veritably impossible train to ride and decided that we had to do it. We took the bus to Pawtucket from Providence. On the bus all these people talked to us about pro wrestling and that was pretty cool. We walked to the train yard and snuck in through the whole in the Church fence that we had scoped out. Then we sat around for a really long time waiting for the train to build. Eventually it started to get dark and we climbed into an empty coal car and played scopa for a few hours before we went to sleep. 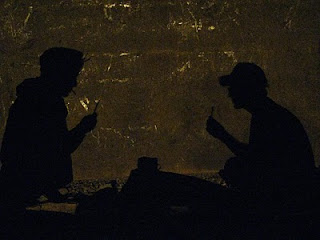 Here is a picture of me and Paulie playing scopa. I'm still not sure why I'm writing about Pawtucket.

When we woke up we sat around for a minute, ate some sardine sandwiches, slapped some mosquitoes, ate some peanut butter sandwiches, took a nap, shit in a ditch, slapped some more mosquitoes, told the same stories we'd been telling each other all month. Eventually a train started building and I was like, "fuck this" and just ran and jumped on it. Paulie followed suit, got on like, two cars behind me and made his way as stealthily as he could to my car. The train was doing work, just pulling back and forth. I was laying on my back watching the same trees pass by over and over like a Bugs Bunny chase scene background. Paulie was running around like a maniac looking out these holes in the side of the wagon for a while. Eventually we were standing still and Paulie looked through the little hole and he shrieked and jumped back. He told me later that he had looked through the hole right into a human eye.

A few minutes later a guy who looked like Pat Munroe, who looks like Clint Eastwood, climbed up the ladder and poked his head in the side of the car. "Well I'll be!," he exclaimed, "are you guys real hobos?"
I pointed at Paulie without getting up from my prone position. "He is. I'm on vacation."
The guy asked us where we were going, we told him Worcester and he said, "well, you know you could take a bus there? Besides, this train's just going into downtown Providence to pick up cargo."
Paulie hazarded the question on both of our minds, "Well, could we ride back that way?"
"'Fraid not. I'm not mad at you but I'm not exactly comfortable with knowing you guys are here. Besides, it'll take an hour and a half and we're not leaving for another two hours. You could be back there in 25 minutes on the bus."
A moth flew out of my pocket and the kindly train worker gave us each a dollar-fifteen in change for bus fair. We climbed out of the wagon and started through the bushes up the hill to the hole in the fence.
"You can just go out through the service road this time, I know you're here, you're not hiding from anyone anymore."

We were pretty defeated. We walked out out down the road. Suddenly our packs were unbearably heavy and it was unpleasantly hot. We stopped more often than usual to stand over Pawtucket's many bridges and spit in the water and kvetch. Paulie's not Jewish, but he is the kind of Jersey Italian that might as well be Jewish. He complains like one of us. Eventually we walked past this picturesque diner that we had passed on the bus and both wanted to stop in.
"Now or never, I guess." And we walked in.

It had the timeless Americana quality of any weird David Lynch locale. There was an old lady counting nickels out loud to pay her bill the whole time we were there. She would get up to somewhere around $1.85 every time before she lost count and had to start over. There were a couple of families with really creepy seeming kids. The waitress was unbearably nice and obviously married to the fry cook, who scowled at Paulie and me the whole time. In short, it was a perfect place.

The walls were all decked out with newspaper clippings about a movie called American Buffalo, starring Dustin Hoffman and Andy Sipowicz. It was based on a David Mamet play and it seems like Pawtucket was really excited because it was the first movie ever shot there. The fact that the film featured the very diner we were in was mentioned prominently in a number of articles. Paulie wrote the name of it down in a notebook.

A few days later we came back to New York. I moved back to my apartment, Paulie took off again. Back to New Endland to ride freight around Maine, and then down to Latin America somewhere. Chile, Argentina, I forget which of Paulie's trips happened when. When he got back from The South, he moved into the storage loft in my room for a few months. If you are ever forced to live on a bunk bed with someone, pick Paulie, he is a great bunk mate. Anyway, at some point during Bunk Punx Autumn ,Paulie rented American Buffalo and reminded me why we should watch it together. If I remember correctly, it opened with a shot of the diner's exterior and then the entirety of the movie happened inside a store and you never saw any of the rest of Pawtucket ever again. It wasn't very good, in my estimation, but this blog isn't about movies, it's about pizza.