Since Thursday when I went and ate pizza with him, I've been thinking of a concise way to describe my friend Aaron. Mostly I've been thinking about whether or not to share the totally embarrassing things I did when we first met. Since I can't decide, I will say this much: Aaron has been an inspiration to me since I was a teenager, and it's nice now that I'm a grown up that I get to be friends with someone I looked up to back then. A few years ago he used to sell books on Astor Place, and one day I was walking around down there with my sister after going to our cousin's kid's bris. We walked by Aaron's table and he said, "hey Colin, why the fancy clothes?"
"Oh, I was at a bris. It was weird. There was a funny mohel."
"Funny mohel?"
"Yeah, like, he was basically doing a standup routine while he snipped junior's junk. It wasn't sure how I felt about it at first, but in the end I think I'm into it. Anyway, I gotta run."
As we walked away I was thinking about all the different ways I could let it slip, casually of course, that we had just passed Aaron Cometbus and that he had just said hi to me on the street. I was thinking about all the other ways that my adult life had pretty much become my teenage punk dream life and about how proud I was, (and rightfully so!), and how proud my kid sister would be and how impressed she'd be that her big brother hung around with "famous authors". And at some point these mile-a-minute thoughts were interrupted by my sister saying, "ewww, you know that weird old guy?!" There are many meanings to extrapolate from this seemingly simple story, but I'll leave that work to you, dear reader.

When Aaron and I met up on Thursday neither one of us had ingested even a sip of coffee, so we were both far from top form. I, however, was totally elated from having just ridden my Nice Bike in Manhattan for the first time in months. I owned the streets! Bless the Great Pizzaola, for in her constant benevolence she has endowed me with the ability to Understand Traffic, a gift I vow to never take for granted. I was talking a mile a minute about nonsense as we sat on the curb and smoked. Aaron was trying his best to keep up, but we soon realized that without some caffeine and some food we'd never be able to carry on a coherent conversation. So we headed to our first pizzeria, Bella Vita. 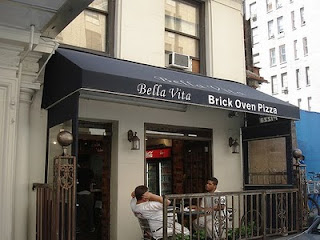 There was a ton of construction outside, and a big cement truck parked pretty much on the sidewalk, so there was no way for me to take a picture of this place. As such, I've stolen a picture from Midtown Lunch. This is not an endorsement (though it's not not an endorsement) because I've never read that website, but I figured I should give them credit for the photograph I pilfered.
Bella Vita Pizzeria is a stark contrast from the hustle and bustle of 58th Street. There's a weird sense of calm within the restaurant. I don't remember if there was music playing, but I do recall that it was far more quiet and serene inside than it was on the sidewalk, which is not always the case with a pizzeria. Either way, it was a pleasant shift, to say the least. The slice here is one of these bizarre mutant combinations of a traditional street slice and a neapolitan slice. It's not quite as good as Little Luzzo's on 96th, but it's of the same ilk. The ingredients were insanely high quality, the slice was warm and hearty in that way that warms your whole body, but it was still delicate and light. Aaron said the slice was "light and tasty, like Vietnamese food," and I will take it on faith that the comparison makes sense, but I don't quite understand. Although every time I eat Vietnamese food I eat like, an entire cow's stomach or something, so that might explain a little bit. I guess, come to think of it, that a good Bahn Mi is delicious and flavorful without ever being heavy and overbearing, so the comparison works, because that's what this slice is like. It is absolutely not the ideal street slice that I am questing after, but this slice is easily as good as many of the margherita pizzas I've had at fancy Italian restaurants and at $2.50, it's kind of a fucking steal. When your tastes are feeling fancier than your wardrobe, this is the place to come and not feel out of place eating something delicious.