This past Wednesday, I had the pleasure of eating pizza with Jason Polan, who is undertaking the task of drawing every person in New York! He even drew a picture of me, which I don't think does much to spoil my anonymity that I haven't done already: 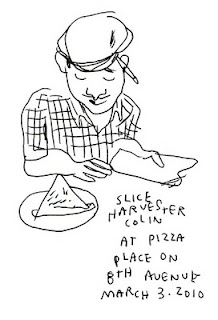 I think it's pretty cool, but I'm really vain, so go figure. My friend Justin Sullivan, who is an amazing musician, total dream babe, and excellent journalist put me in touch with Mr. Polan because he thought our projects were similarly unrealistically comprehensive. In a certain sense, I feel like Jason is possibly the only person in this town trying to do something more sisyphean than me, although I'm sure human birth and death rates are similar in frequency to pizzerias opening and closing. The first place Jason and I ate at was Strokos Pizza Deli, a place I distinctly remember skipping when I ate pizza with my mom some months ago. But that was because we ran out of places on my list and I didn't know if it was OFFICIAL. Well, as it happens, Strokos lists itself in the phone book as a pizzeria, and that's really all it takes for me to eat a slice somewhere unless it disqualifies itself for any number of reasons once I step inside. Strokos was one of these weird cafeteria that I find kind of distasteful where there is like, the Burger Area and the Panini Area and the Pizza Area and then you pay at a single register when you're walking to the seating area. The big difference between Strokos and Columbus Gourmet Shithole or whatever that place I linked up there is called, was that CGS was full of bland suits on lunch break and Strokos was full of grimy weirdos sleeping at the tables. Which is to say, much better atmosphere. The first thing I should say about this slice is that it wasn't good. The second thing I should say about this slice is that I really, Really, REALLY enjoyed eating it. You see the visual crescendo of no-caps to all-caps over there? That's kind of what my emotional experience with this slice was like. I went from somewhat ambivalent to TOTALLY INTO IT. Remember though, this slice sucks. It was like if someone took a can of crappy, sugary pureed tomatoes, poured a thing of garlic powder onto it, and then put it on top of a sponge and melted a string cheese over the whole thing. But for some reason, it was just so warm and satisfying I downright didn't care about any of that. I think the thing about this slice is that it's crappy in a really familiar and comforting way. Which is weird because it's not at all like any of the pizza I ate as a kid or anything. But I just think maybe every time I've left New York I've dumpstered pizza that was like this. Also, I was really hungry. Anyway, I don't endorse this slice, but I would be lying if I didn't acknowledge that I really enjoyed it for some strange reason.